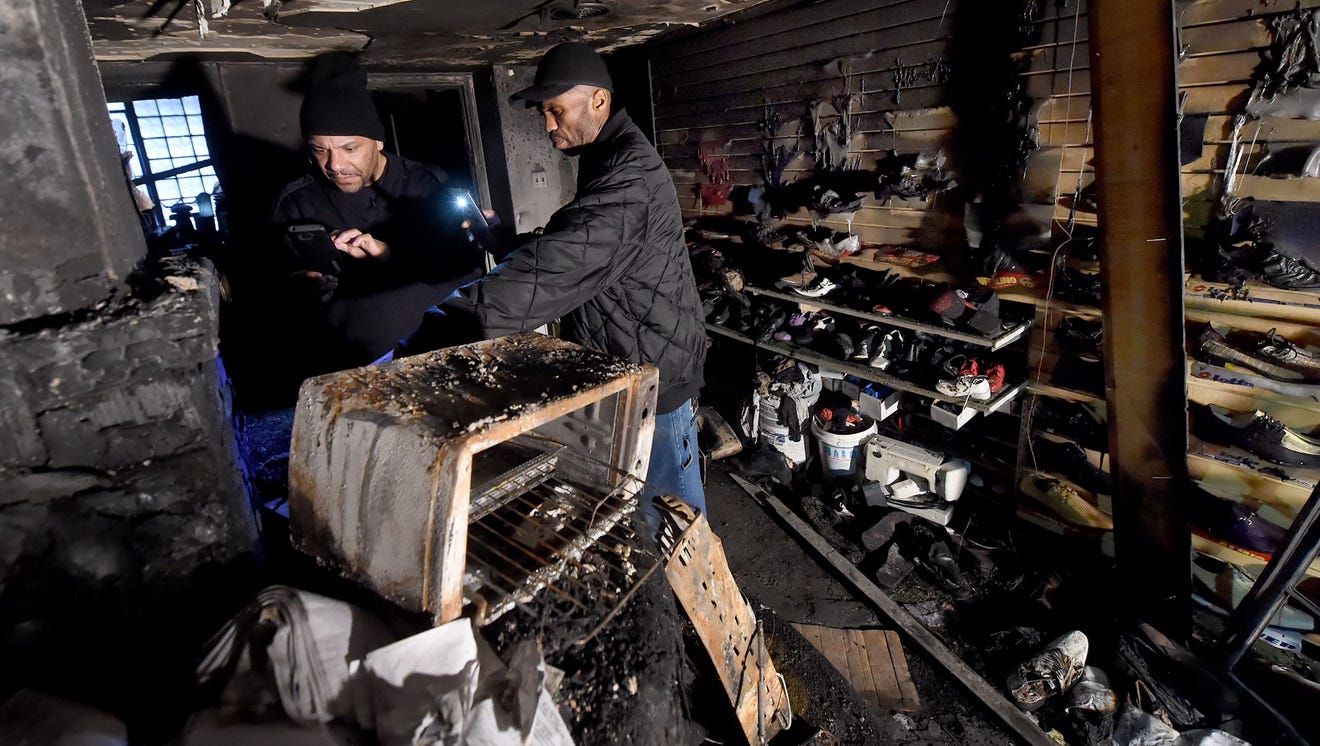 It had been a week, and still Willie Standley wasn’t used to it.

There was probably no way to get used to it. For 26 years, the store, The New Hub, had been his business, his life. He built the business. It had been established when he took it over, occupying the corner storefront at the corner of South George and King streets for about a century. But when he took it over, it had passed its glory days, as many of the small shops downtown had, victim to the big boxes and discounters in the suburbs.

Willie Stanley, right, owner of the New Hub clothing store, shows his friend, Michael Pope, the area where a fire started in the rear of his York city business.
He set about putting his stamp on the business. His customers weren’t just customers; they were friends. It was all about relationships, about doing right by people, treating them with kindness and respect. Over the years, the business became more than just a clothing store; it became an institution in town. Willie knew everybody, and everybody knew Willie.

He’s clothed kids who went on to college and to careers. He’s clothed working men. He’s clothed people whose lives took bad turns, along the way, advising them of the consequences of bad decisions. He’s received letters from them, from prison. They write that now that they’ve had time to sit back and think, they realized they didn’t listen, that what Willie was saying wasn’t registering. “If I just listened to what you said,” they write.

The wall by the cash register was covered with snapshots of customers in their new clothing. Willie didn’t look at the people in the photos as customers; they were friends and family. The photos are now covered with soot.

When the fire closed down the store, Willie was left hopeless and helpless. For the first time in 26 years, he didn’t have a business to run. He didn’t have his connection to the community, the people just stopping by to say hello or ask after his family or, if they were lucky, get one of his mother’s famous sweet potato pies, the best pie you ever ate in your life.

“This was the culprit,” Willie said, holding up a charred electrical receptacle box, a short length of the old wiring from the century-old building still attached.

This is where they said it started, in the back of the store, where a space heater had been plugged into the offending receptacle. You can see, just above the receptacle’s location, what the fire investigators call “alligatoring,” the scales burned into the wood by the flames.

Along the wall, a display of shoes remains, or what remains of the display, shoes melted into the plastic that had once held them. “A lot of heat,” Willie said.

The fire was more than a week before, starting just before midnight of Jan. 16. The fire damage to the building was mostly contained to the rear of the store and his alteration room in the back. But the smoke had claimed pretty much all of his inventory; a week after the fire, the acrid odor still burned your nostrils.

Immediately after the fire, he kept thinking, “This can’t be happening.” It was just so surreal, like a bad dream.

Things have gotten better for Willie. His motto, “Don’t stress it; address it,” is paying off. He has been busy with insurance adjusters and cleanup crews – doing the things to address it – and a steady stream of friends stopping by to see whether he needs anything.

As word spread about the fire, people have stopped by just to give him a hug. Others took a look at his store and began weeping. The other morning, Tony Orr stopped by to offer advice.

Tony and Willie have been lifelong friends, ever since they were kids growing up in the Parkway projects. Tony knows what Willie’s going through. He owns Orr Sons and Daughters Barber Shop on West Philadelphia Street, and in 2008, he had a fire. He still remembers the date, Sept. 28, 15 years to the day when he bought the business.

Tony and Willie talked, Tony offering advice on getting through the process and offering to do whatever he could help Willie. “You know I’m here,” he told Willie. “You need any help, I got you.”

It’s been gratifying, the people stopping by. It gives him hope and confirms that he set out to do what he wanted when he started in business years ago, to build something in the community, to forge relationships, to become part of something.

The help has come from all over. A promoter in Philadelphia, who heard about the fire from a mutual friend, called Willie out of the blue and offered to put together a benefit to raise money. Willie has insurance, but he thinks it would be a good idea to throw the benefit for the firefighters and police and the Red Cross and the Crispus Attucks Community Center, to help the people who helped him.

“Treat people with love and respect, that’s how I conduct my business,” Willie said.

And it’s gratifying see the love and respect come back to him. “You get back what you give in life,” he said.

Willie will have to vacate for about a year as repairs and renovations are completed, the insurance company has told him. He plans to move into the storefront next door, now occupied by a vaping shop that’s closing down, legislated out of business by the new state tax on vaping. The business is closing down at the end of the month, and Willie is planning to throw a party for the proprietors. They aren’t just tenants in his building; they’re neighbors.

On Monday morning, the electrician who helped pinpoint the source of the fire stopped by to see whether there was anything he could do for Willie. There wasn’t.

But as they talked, Willie noticed that the man’s work boots had seen better days.

The electrician perused the work boots on a rack by the door. Willie thought about it and asked the crew from the insurance company whether he could give the man a pair of boots. They said he couldn’t do it until all of his inventory was accounted for.

After so many years in business, he said, “I can’t even give anything away.”

Mike Argento’s column appears Mondays and Fridays in Living and Sundays in Viewpoints. Reach him at 717-771-2046 or at mike@ydr.com.